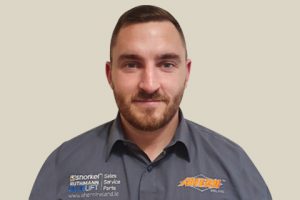 It is with great pleasure that Ahern Ireland announces the appointment of Robert Hickey as Branch Manager.

With overall responsibility for day-to-day operations, Robert will lead Ahern Ireland’s existing team of three, implementing processes and systems to ensure the continued growth of the business. He will work alongside David Roddy who continues to lead sales efforts in the territory, with direction from Ahern Ireland Managing Director, Andrew Fishburn.

Officially opened in June 2019, Ahern Ireland is a division of Ahern International owned by Don Ahern. Focused on equipment sales, service and spare parts, Ahern Ireland is the official distributor for Snorkel™ aerial work platforms and Ruthmann Bluelift tracked spider lifts in Northern Ireland and the Republic of Ireland.

Robert brings 12 years’ experience working in after-sales roles within the plant equipment industry to the newly-created role of Branch Manager at Ahern Ireland. He previously worked for Liebherr Ireland, where he was promoted from Spare Parts Co-ordinator to Service Supervisor.

Of joining Ahern Ireland, Robert said, “I am really pleased to be joining Ahern Ireland at this early stage in the journey. The business, which launched in June, already benefits from a dedicated team, fantastic facility, and a strong level of support and investment from our owner, and I look forward to building upon these solid foundations, making Ahern Ireland the ‘go to’ provider of work at height equipment and technical services in Northern Ireland and the Republic of Ireland.”

Andrew Fishburn added, “Robert has a strong background in the equipment industry, and fully understands the value of exceptional after-sales support to ensure the growth and longevity of the business. Our existing team have done a phenomenal job in setting up and establishing Ahern Ireland, and with Robert’s leadership, I am confident we can move to the next level in customer service and support.”

Robert joined Ahern Ireland on 16th September 2019, and has assumed the position with immediate effect. He is based at Ahern Ireland’s facility in Rathcoole, Dublin.